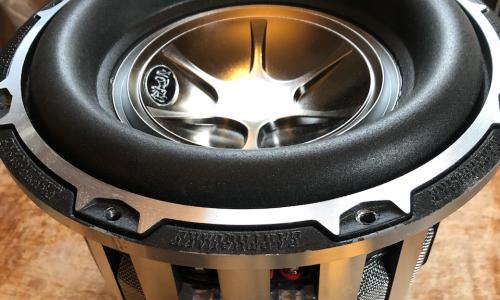 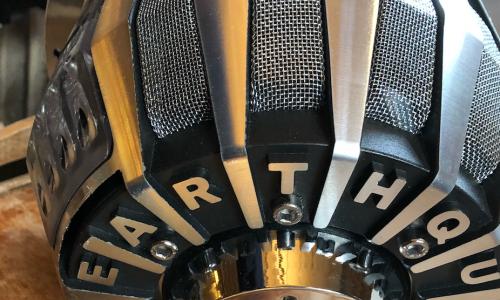 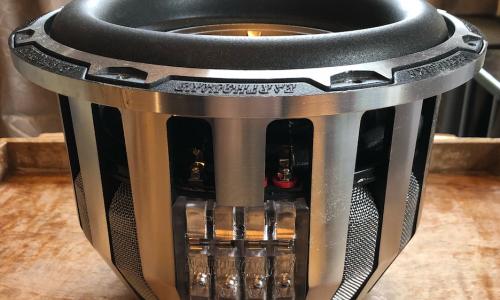 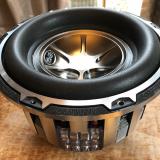 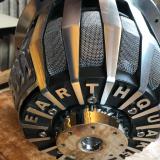 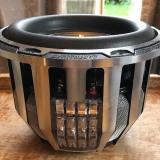 Contact
Subzero -When only the best will do
This latest iteration of Subzero is a tour de force of how advanced design and technology can come together to create superior sound quality. All aspects of the design have been perfected to the smallest detail, resulting in truly revolutionary woofer performance. Subzero is capable of an incredible 2.5"excursion (10" Subzero). With excursion of this magnitude, Subzero produces levels of bass unattainable by conventional woofers. The extreme excursion ability coupled with the unique suspension makes Subzero extremely transient proficient. Even a light touch on the cone, easily moves it several centimeters. This ease of movement combined with the ultra-powerful magnet system results in a spectacularly fast  and precise response. Subzero is free of the mechanical and electrical constraints inherent to common woofers.
Lava-fused Octo Helix voice coil
Subzero is equipped with a unique voice coil of oversized proportions. All aspects of the voice coil design are optimized for maximum performance, durability and sound quality.
In the creation of the Subzero voice coil, Earthquake scientists have boldly challenged the very genesis of the voice coil itself.
Traditionally, a lot of effort goes into choosing the right voice coil former  (the cylinder to which the coil is wound). The former must be light, have similar heat expansion properties to the voice coil and it must promote cooling. Constantly advancing the state of the art, Earthquake engineers theorized  that the best solution must be to have no former at all. While this theory flies in the face of all conventional wisdom, our engineers pressed on. During this proof-of-concept phase, it was realized that the technology needed to do away with the former simply did not exist. Instead of abandoning the quest for formerless technology, the research was extended to include facilitating technologies. In place of the structural support provided by the former, a super strong ultra high temperature adhesive was needed. A new insulator for the coil wire was also needed as traditional lacquer insulator does not have sufficient bonding properties for it to fuse together at the required tensile strength. This challenge was constructive in its own right as the biggest threat to woofer survival is heat, if the essence of this new technology would bring forth a temperature resilient voice coil it would  serve to improve all other aspects of woofer operation.
The creation of the needed high temperature adhesive proved difficult and the next break would come as an unlikely discovery by our Chief engineer while on vacation in Hawaii. Taking a scenic tour of Hawaii, he was walking through an area with volcanic ash and realized that the ideal base substance for a high temperature adhesive would be a material with no combustible elements left. Volcanic ash fits this description perfectly as it has been exposed to extreme heat - it has been combusted to the point where further heat exposure will not change its molecular structure.  The volcanic ash was taken to our German adhesive manufacturing partner and six months later we had our next generation temperature invariant super adhesive. Now we just needed an equally temperature resistant insulator. The only known insulator capable of withstanding this immense heat was anodizing. Anodizing however is problematic because it breaks off the host material if it is bent beyond a certain point. After much experimentation it was discovered that it is possible to prevent the anodizing from breaking off if the coil wire is heated to red hot temperature at the time of winding. Finally, the first former-less voice coil could be made. The audible qualities springing from this new lighter and stronger coil type is nothing less than remarkable.
Signature technologies such as the Octo-Helix winding scheme has evolved for use in the new Subzero. The Octo-Helix design requires a very advanced production process. The Helix design is unique because it allows identical electromagnetic coupling and thermal signatures of two voice coils. In a conventional subwoofer with dual voice coils, they are wound one on top of the other, resulting in asymmetrical electromagnetic coupling and heat dissipation capability. The Helix structure is free of these limitations, since the two coils are wound synchronously in-phase. The Helix wound voice coil is characterized by several obvious advantages - perfect electromagnetic coupling, identical thermal signature, lower distortion, higher performance and durability.
The voice coil is comprised of eight (octo) layers of edge wound oxygen-free copper wire. This special copper wire is of the flat-wire type. Flat-wire has a much greater surface area than conventional round wire and can thus dissipate considerably more heat it. Another advantage is the coil can be wound closer - increasing motor power. The coil assembly meets mil-std specifications for temperature resilience - specifications set by the U.S. Department of Defense for use in military equipment. This guarantees peak performance even during hard and continuous operation.
TCT - Turbine Cooled Transducer

Subzero is equipped with the patented TCT (Turbine Cooled Transducer) technology. TCT creates cooling airflow similar to a tornado around the voice coil. The tornado is created by air forced through cooling channels milled in a vortex structure. Traditional voice coil cooling is done by drilling out the pole piece and the woofer stroke then pushes air back and forth. This cooling scheme only has a linear increase as a function of woofer stroke. TCT is different. TCT creates an exponential increase in cooling capacity as a function of woofer stroke. This is achieved by harnessing the centrifugal forces in the mini tornado to increase surface area contact between the air and voice coil. TCT is so effective that the voice coil temperature is reduced 50% compared to the same woofer without TCT. This prevents heat derived compression and keeps the woofer at maximum efficiency.. The compression is a result of the increased electrical resistance of the voice coil - the higher the temperature, the higher the resistance. Since TCT's cooling capacity increases exponentially with excursion, heat is not allowed to build up. The harder you drive Subzero the more it cools itself.

Poly-Ether draw SWE (Super Wide Edge) suspension
For Subzero our unique SWE (Super Wide Edge)  suspension design has been enhanced  by the use of Poly-Ether draw material. Sporting an extreme curve height of 62 mm the stage has been set for incredible excursion. The manufacturing of this advanced suspension is a complex process spanning several stages. Poly-Ether draw is used primarily in military applications because of its high strength and flexibility. The sophisticated and costly processing requirements has so far limited its use outside the military. Thanks to the obsessive high-tech emphasis by Earthquake, the entire Poly-Ether draw  manufacturing process can be done in-house. As part of the manufacturing process, the Poly-Ether material is thermally pressed and laminated giving it extreme strength and mobility. The suspension geometry is of the single-layer type and allows ultra long excursion without mechanical breakup. This results in woofer stroke potential in excess of 100 mm without deformation or increased mechanical resistance.This ensures perfect reproduction of even the most bass heavy soundtracks
Parabolic deep dish woofer cone
The Subzero cone is made of a proprietary non-pressed fiber reinforced cellulose pulp substance with extreme stiffness. The cone is then superimposed with a parabolic deep dish made of a strong space age polymer that obtains additional rigidity by its geometric shape. The cone does not flex or deform regardless of  input power and frequency.
Dual Super-Spider  with composite center and symmetric stitched tinsel leads
The Subzero spider is of the super spider type, which means the spider has the same diameter as  the cone -this ensures the spider is not limiting excursion. The Subzero is equipped with a double super spider unit comprised of a Nomax /Romax hybrid material that has been epoxy coated for increased strength. The individual  super spider units are arranged as identical opposites - canceling nonlinearities inherent to typical single or dual spider designs.The result is a clean sound - free from mechanical artifacts. For optimal performance the edge suspension  and spider must have the same excursion potential, this is not possible with a traditional spider of limited diameter.
Traditionally, the spider is glued to the voice coil, this results in heat transfer from the voice coil to the spider. This heat transfer effects the spiders compliance and can over time degrade the spider. The Subzero super spider is not glued the voice coil, but attached to a composite center ring that in turn is bonded to the voice coil. The special composite material is neither heat sensitive nor a thermal conductor. Thus the endurance and longevity of the Subzero is not affected regardless of drive level.
The tinsel leads to the voice coil are sewn into the spider to ensure against collision with the cone during extreme excursion. This also extends the life of the tinsel leads, as they now bend more gently over a longer distance.  The symmetrical design of the tinsel leads prevents an asymmetrical pull on the cone. The result is longer woofer life, and greater endurance.
Double stacked Cobalt-Ceramic high gauss magnet system
Subzero is built around a gigantic magnet system. It consists of two huge Cobalt-Ceramic magnets which have been hyper magnetised in-house by Earthquakes military grade Magnetiser. The two magnets have a total thickness of 6 cm, the  top plate alone is 1 cm and the pole piece is 5 cm. With a total height of 12 cm - the voice coil  is given unhindered travel space far beyond its mechanical limits. This ensures that not even the strongest transient may cause the device to run out of electromagnetic coupling. At the same time the high gap height contributes to voice coil cooling, as the immense mass of metal effectively absorbs heat.
Diamond cut chassis with XLT geometry
The Subzero is based on Earthquakes signature  XLT chassis geometry. It is the optimal design for extreme excursion. The XLT chassis allows for  extra length between the spider (center suspension) and the magnetic gap. It is designed to accommodate oversized spiders and voice coils.
The Subzero chassis feature another advanced design detail unique to the Subzero. All other woofers have the chassis mounted on top of the magnet. The Subzero encases the magnet within the chassis and the chassis is mounted to the magnet from behind. This special design prevents the chassis from degrading the magnetic flux asserted on the voice coil. The oversized and rigid chassis is made of cast aluminum which is then diamond cut. This results in an ultra-rigid and robust chassis featuring stunning good looks. The chassis is further characterized by all components of the assembly being bolted together with stainless steel machine screws. This design is extremely rugged compared to ordinary assemblies where the chassis and magnet system is often glued and / or tabbed together. The technically superior design ensures exceptional durability, sound quality and pride of ownership. 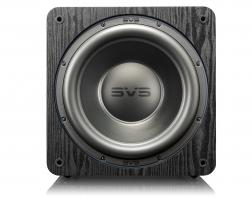 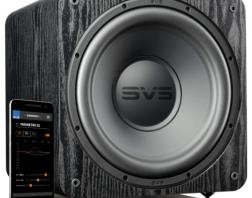 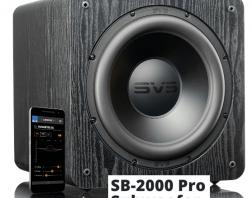 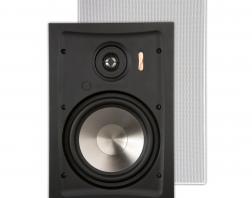